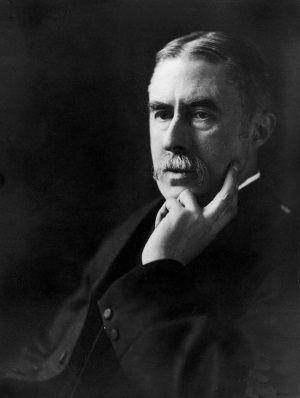 Alfred Edward Housman was born in Fockbury, near Bromsgrove in Worcestershire, the eldest son of a solicitor. His mother died on his twelfth birthday and his father married an elder cousin two years later. Housman was educated at King Edward’s School in Birmingham and later Bromsgrove School, where he started to write poetry. He went on to St John’s College, Oxford, to study classics, where he formed a close attachment to his two roommates. He obtained a first in Moderations but failed his Finals, having neglected the ancient history and philosophy part of the course. He returned the following term to obtain a pass degree.

On leaving Oxford he went to work as a clerk in the Patent Office in London, where he was to spend the next ten years. Undaunted, or perhaps spurred on by his lack of success at university, he pursued his classical studies in his spare time, studying Latin texts at The British Museum and publishing scholarly articles on Latin and Greek writers. As a result of this he established a reputation that led to his being offered the position of Professor of Latin at University College, London, in 1892. In 1911 he was appointed Professor in Latin at Cambridge University, where he remained for the rest of his life. He had very high standards and could be extremely severe in his criticism of his students’ work, and it is said that he sometimes reduced his female students to tears.

During his years in London Housman completed A Shropshire Lad, a cycle of 63 poems, which includes his best known, “Loveliest of Trees, the Cherry Now”. However, he always considered his English poetry subordinate to his scholarly classical output, exemplified in his five-volume edition of the Astronomica of Manilius, a first century Latin poet.

After World War I Housman began writing a new set of poems to commemorate the war dead including his Epitaph on an Army of Mercenaries, which honoured the British Expeditionary Force. He published Last Poems in 1922, and after his death in 1936 his brother published More Poems in 1936 and Collected Poems in 1939. In 1942 his brother also deposited an essay, A. E. Housman’s De Amicitia, in the British Library with the proviso that it was not to be published for 25 years. This discussed his homosexuality, which was illegal then, and his unrequited love for one of his housemates at Oxford. He died in Cambridge, aged 77.

“Loveliest of Trees, the Cherry Now”

Soldier from the Wars Returning

To an Athlete Dying Young

Buy books related to A. E. Housman at amazon.co.uk