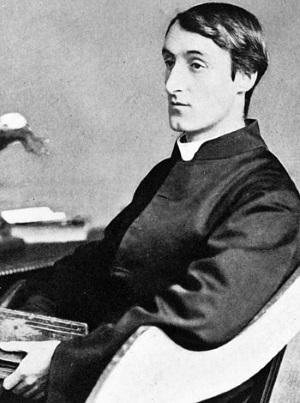 Gerard Manley Hopkins was born in Stratford, Essex, the eldest boy in a large, highly-talented, devout Anglican family. His father was a founder of a marine insurance company, sometime consul-general for Hawaii in London, and a published poet; his mother a lover of music and literature. His siblings also became prominent in several artistic and cultural fields. Through the influence of his parents and relatives, Gerard’s first ambition was to become a painter and he was taught to sketch by his aunt Maria.

In 1852 the family moved to Hampstead and Gerard was educated at Highgate School, where he was a boarder. His earliest poem, The Escorial, was published while he was there. He went on to Balliol College, Oxford, to study classics, and whilst there formed a lifelong friendship with the future poet laureate Robert Bridges. Together with Gerard’s sister Kate, Bridges was ultimately responsible for the publication of the first edition of Hopkins’s poems. Whilst at university he published his most ascetic poem, The Habit of Perfection. He graduated in 1879 with first class honours.

Around the time of his 22nd birthday he took the decision to convert to Catholicism and was received into the Roman Catholic Church a few months later by the future Cardinal Newman, an earlier convert. This obviously did not go down well with his devout Anglican family and some of his friends. On leaving university he took a teaching post in Birmingham and, having resolved to become a Jesuit priest, became a novice at Manresa House in Roehampton. He abandoned poetry for the next few years, believing it to be incompatible with his vows of poverty, chastity, and obedience. In 1874 he returned to Manresa House to teach classics and in 1875 was persuaded by his superiors to write the poem The Wreck of the Deutschland, about a maritime tragedy in which a number of Catholic nuns exiting Germany perished.

He was ordained as a priest in 1877 and in that year wrote God’s Grandeur, a range of sonnets which included The Starlight Night. He took up a post at Mount St Mary’s College near Sheffield as a sub-minister and teacher of Latin and Greek. After periods as a curate at several British cities, he became Professor of Greek and Latin at University College, Dublin. However, he disliked living away from England and his friends. He died in Dublin of typhoid fever in 1889.

Following the publication of Hopkins’s poems in 1918 and later editions, he emerged as a major figure in English poetry. Although often dealing with religious themes, his poetry is remarkable for its interplay of sounds and rhythms and its inventive language.

The Wreck of the Deutchland

No Worst, There Is None

The Sea and the Skylark