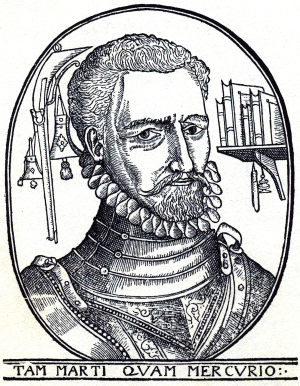 George Gascoigne was born in Cardington, Bedfordshire, the son of a wealthy landowner and farmer. He is said to have been educated at Trinity College, Cambridge, but there is no record of his presence there. He became a member of Gray’s Inn in 1555 and thereafter pursued careers as a politician (he was MP for Bedford between 1557 and 1559), courtier, soldier, and poet. He was an almoner at Elizabeth I’s coronation and aspired to become a courtier. He married Elizabeth Breton, a wealthy widow, but only after some legal dispute about her single status. He thus became the stepfather to the poet Nicholas Breton.

It would appear that Gascoigne was a somewhat dissolute character as he was either disinherited by his father or forced to renounce his inheritance to pay for debts he had run up at court to get out of prison. He sought re-election to Parliament in 1571 but was debarred by the Privy Council as “a notorious ruffian, an atheist and a godless person”. Instead he went to the Netherlands to fight for William of Orange (William the Silent) in the revolt against the Spanish occupiers. He was taken prisoner during the Siege of Leiden and was repatriated in 1574. The following year he was involved in providing entertainment for the Queen’s visit to the Earl of Leiceter at Kenilworth Castle and Woodstock. In 1576 Lord Burghley appointed him to lead a mission to Paris and Antwerp and on his return he produced his Spoyle of Antwerp, a report on the sacking of the city, purportedly an eye-winess account but more likely plagiarised from a Dutch pamphlet. He died the following year at the home of George Whetstone, a dramatist, in Barnack, near Stamford.

George Gascoigne is considered one of the most important poets of the early Elizabethan period. Several of his works were in praise of Queen Elizabeth I with the object of obtaining her favour. It would appear that she liked him which ensured his protection from other senior courtiers in an environment where intrigue was rife and enemies easily made. His best known works are A Hundreth Sundrie Flowres (1573), a collection of verse and prose, and Posies of Gascoigne (1575) and The Complainte of Philomene (1576). He also wrote several prose works, a play, The Supposes (1566), a translation of Ariosto’s I Suppositi, and A Discourse of the Adventures of Master F.J. (1573).