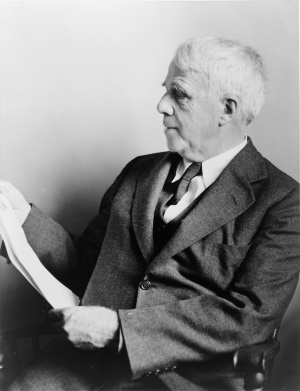 Robert Frost was born in San Francisco but moved with his family to Lawrence, Massachusetts after his father's death in 1885. His academic studies at Dartmouth College and Harvard were curtailed by financial constraints. He married in 1895 and after a series of family bereavements moved to Buckinghamshire, England in 1912 to take up farming.

During his time in England he became a friend of the pastoral poet Edward Thomas. His first book of verse, A Boy's Will, was published in 1913 and the second, North of Boston, a year later. He returned to the United States in 1915, thereafter devoting himself to poetry. A third book of verse, Mountain Interval, was published in 1916. He gained further recognition with New Hampshire (1923), Collected Poems (1930), A Further Range (1936) and A Witness Tree (1946), all of which won the Pulitzer Prize. Later works include A Masque of Reason (1945), A Masque of Mercy (1947), A Steeple Bush (1947) and In the Clearing (1962).

Frost's poetry has a haunting, philosophical quality to it, reflecting his personal solitude and a strong, comforting attachment to nature.

The Road not Taken