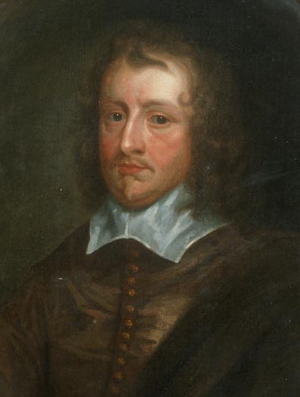 Sir Richard Fanshawe was born in Hertfordshire, the youngest son of Sir Henry Fanshawe, the Remembrancer of the Exchequer, a judicial post later held by his eldest son and subsequently by Sir Richard himself. He was educated at Jesus College, Cambridge, and went on to the Inner Temple to study Law but, after having received an inheritance of £1,000 on his mother’s death, used it to pursue a diplomatic career.

In 1635 he was appointed Secretary to the Embassy at the Court of Spain and in 1638 Chargé d’Affaires there. At the outbreak of the Civil War he supported the Royalist cause and in 1644 acted as Secretary of War to the Prince of Wales, the future Charles II. From 1648 to 1650 he served as Treasurer of the Navy under Prince Rupert and during this period went to Spain to seek their assistance which was refused.

After the execution of Charles I, his son was proclaimed King of Scotland and Sir Richard became his Secretary of State. He was captured at the Battle of Worcester in 1651 and briefly imprisoned but released on bail of £4,000. Over the next few years he devoted himself to poetry, translating selected works of Horace, producing a version of the 4th book of Virgil’s Aeneid in Spenserian stanza and translating Camoes’s Lusiad in the original metre. Several years earlier he had translated Giovanni Battista’s Il Pastor Fido (The Faithful Shepherd). During the latter years of the Civil War and the Interregnum he travelled extensively on the Continent with his wife, a second cousin, whom he had married in 1644. On Cromwell’s death he re-entered The King’s service in Paris and later became his Latin Secretary in Holland. He was knighted at Breda in 1660.

Following the restitution of the monarchy he became the member of Parliament for Cambridge University and in 1662 was appointed ambassador to Portugal and two years later concurrently ambassador to Spain. In this former capacity he was involved in brokering the marriage of Charles II to Catherine of Braganza. He died suddenly in Spain at the age of 58. His talented widow wrote a memoir of his life. She also wrote one of the first English cookery books which included a recipe for ice cream which she called “icy cream”.

Sir Richard Fanshawe would appear to have been a man of unblemished moral character. He was also a talented linguist, fluent in Italian, Spanish, and Portuguese. There is a monument to him in St Mary’s Church, Ware, and portraits of him in the National Portrait Gallery and in the Valence House Museum in Dagenham.