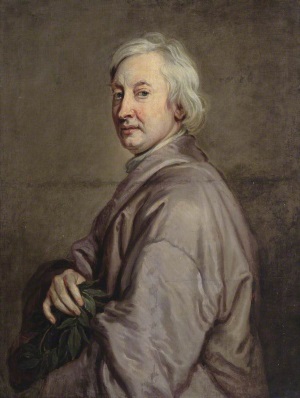 John Dryden was born in Aldwinkle, Northamptonshire, and educated at Westinster and Trinity College, Cambridge, where he excelled in the study of the classics.

His first major work was Heroic Stanzas (1658), a commemoration of Oliver Cromwell's death but he was quick to celebrate the Restoration of the monarchy in a series of poems. He was appointed Poet Laureate in 1668 in succession to Sir William Davenant but was stripped of this office twenty years later for refusing to take the oaths at the Protestant Revolution.

He was highly productive throughout the 1670's, particularly in the writing of plays. By 1680 his writing shifted towards political satire with Absolom and Achitophel (1681) and The Hind and the Panther (1687), around which time he converted to Catholicism. In his latter years he occupied himself mainly with translations of the classics and his later great work was Fables, Ancient and Modern.

He was a somewhat controversial figure during his lifetime and on one occasion was beaten up by anonymous thugs in Covent Garden in revenge for something he had written. He is buried in Westminster Abbey.

Ah, how sweet it is to love!

Song to a Fair Young Lady, going out of the Town in the Spring