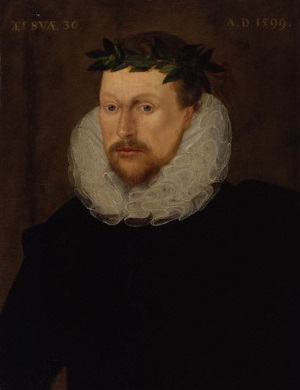 Michael Drayton spent the early part of his life in the service of Sir Henry Goodeere, who furnished him with a proper education.

More is know of his work than his life, for he published a considerable amount of poetry in a career spanning some forty years. He convered a wide range of subjects in a variety of genres.

In 1593 he published Idea, the Shepheard's Garland and the following year Ideas Mirrour, a collection of sonnets. He also wrote a number of historical poems including Piers Gaveston (1594), Robert of Normandy (1596), The Barrons Wars and The Legend of Great Cromwell (1607). His Poems Lyrick and Pastorall (1605) is written in the style of Horace's Odes and contains the Ballad of Agincourt. His major topographical poem of England, Polyolbion, was completed in 1622. During his lifetime Drayton was known as "our English Ovid", a title earned from his England's Heroical Epistles (1597), a collection of imaginary letters exchanged by famous historical lovers.

To His Coy Love

To the Virginian Voyage