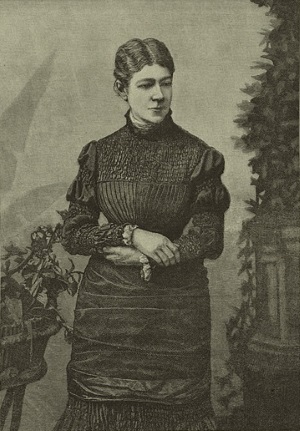 Sarah Doudney was born in Portsea, near Portsmouth, the daughter of a soap and candle manufacturer. She grew up in a village in East Hampshire and but spent most of her life in Cosham, a northern suburb of Portsmouth. She was educated at Madame Dowell’s school in Southsea, a school primarily for French girls, and started writing poetry and prose at an early age, having her poem The Lesson of the Water Mill published in the Anglican The Churchman’s Family Magazine at the age of 15. She grew up in a strongly religious environment, one of her uncles being a clergyman who edited The Gospel Magazine.

She later went on to write a series of novels, mainly for girls, many of which end tragically. She also wrote a large number of poems and hymns, including The Master Hath Come and The Christian’s Goodnight, and contributed to religious publications and periodicals including Charles Dickens’s All The Year Round. At the age of 40 she was still living at home with her parents and in the census of 1881 is described as a writer for monthly journals and in the 1891 census as a novelist. Sarah Doudney never married and after the death of her parents in the early 1890s she moved to Oxford, where she died in 1926.

The Lesson of the Water Mill

The Last Snow of Winter