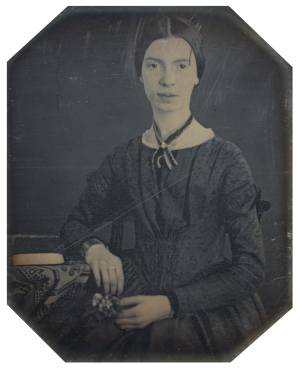 Emily Dickinson was born in Amherst, Massachusetts, the daughter of a US congressman and judge. She was educated at Amherst Academy and Mount Holyoke Female Seminary but after an apparently normal early life, she became reclusive, eschewing almost all contact with the outside world by her early thirties, apart from correspondence with friends.

The vast majority of her poems were not published until after her death, when they were discovered in manuscript form by her sister all neatly packaged. Following a number of clumsy attempts, her poems, numbering some 1775, were published by Thomas H. Johnson in three volumes in 1955.

Dickinson’s poetry has a certain mystic, wistful quality and her style is concise, epigrammatic, unorthodox, and sometimes cryptic. She is now generally regarded as one of America’s greatest poets and her unconventional style has had a major influence on later writers.