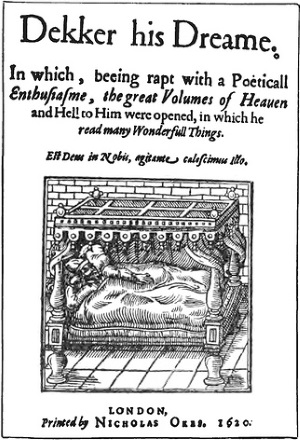 Thomas Dekker was most probably born in London although his name implies Dutch ancestry. We first hear of him in 1598 when between then and 1602 he was involved in the writing of some 40 plays for Philip Henslowe, a theatrical impresario, many in collaboration with other playwrights such as Ben Jonson and John Marston. He later fell out with Jonson but they later collaborated on a pageant for the Royal Entry for James I, a ceremony prior to his accession.

He also later collaborated variously with John Ford, John Webster, William Rowley, and Thomas Middleton over the next few decades in an age when collaboration was commonplace. Although a lot of his plays have been lost, his first known individual play was The Pleasant Comedie of Old Fortunatus, a comedy based on a German legend about a man with a magic purse. The play for which he is best remembered for though is his masterpiece The Shoemaker’s Holiday, written in 1599, a rowdy comedy in which a humble shoemaker rises to become Mayor of London. His other well-known play, written in 1630, was The Honest Whore, Part 2, Part 1 having been written with John Webster some 25 years earlier.

His prime was interrupted by a period of seven years in jail between 1612 and 1619 for a debt owed to John Webster’s father and in prison he wrote Dekker His Dreame in which the volumes of heaven and hell were opened to him. Prior to his imprisonment in 1603 he had of necessity switched to writing prose pamphlets when the theatres had to close because of the plague. His coney-catching pamphlets, particularly The Bellman of London, about confidence tricksters, which offered precise details of everyday life in London in the Jacobean period, proved very popular then and are of historical interest today. He also wrote The Wonderful Yeare in 1603, an account of the death of Elizabeth I, the accession of James I, and the plague, as well as The Guls Horne-booke in 1609 about behaviour in the London theatres.

He was responsible for writing the Lord Mayor’s Pageant in 1612, 1627, 1628, and 1629. His poetry is mostly contained in his plays, the poem The Merry Month of May coming from The Shoemaker’s Holiday and the equally well-known Golden Slumbers from the play Patient Grissel. Dekker had an ear for colloquial speech, which appealed to the theatre-going masses. In spite of the volume of work he produced during his lifetime, he died impoverished in 1632.