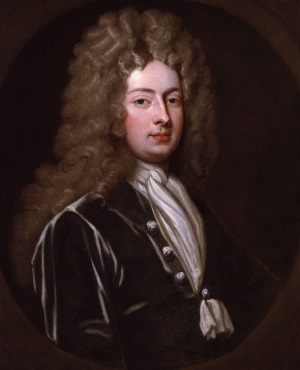 William Congreve was born in Yorkshire and was educated at Kilkenny School and Trinity College, Dublin. He went on to study law at the Middle Temple but did not pursue this as a profession, preferring instead to write novels and plays.

His first major play, The Old Bachelor (1693), brought him instant fame, which was consolidated by two further comedies, The Double Dealer (1694) and Love for Love (1695), and a tragedy, The Mourning Bride (1697). Another comedy, The Way of the World (1700), was not as successful, and this, combined with an attack on the morality of his plays by Jeremy Collier, a literary cleric, caused him to give up playwrighting. He continued as the manager of Lincoln's Inn Theatre until 1705, however, but afterwards confined his writing to masques, prose, and poetry.

Congreve was an entertaining and colourful character. He enjoyed the friendship and respect of his literary contemporaries and counted the Duchess of Marlborough and the actress Mrs. Bracegirdle among his mistresses. He is buried in Westminster Abbey, his death having been hastened by a carriage accident the previous year.

False though She be

A Hue and Cry after Fair Amoret