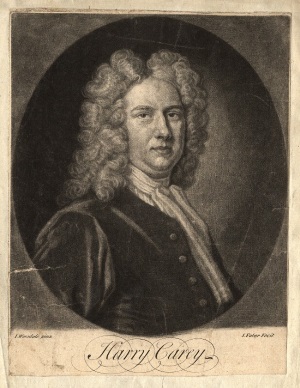 Henry Carey was a prolific English poet, playwright, singer and songwriter, best known for his ballad Sally in our Alley. His origins are somewhat uncertain; he was born in either London or Yorkshire, probably the illegitimate son of George Saville, 1st Marquess of Halifax, a Whig politician, or possibly one of his sons.

He wrote numerous operas and plays as a psalmist at Lincoln’s Inn Church and Drury Lane, also performing there. His later works are noted for his political satire, which made him several enemies. He died by his own hand, hanging himself in 1743. One of his sons, George Saville Carey, made the unsubstantiated claim that his father was the author of God Save the King. Henry Carey also had a daughter, Anne, an actress, who gave birth illegitimately to the famous Shakespearean actor Edmund Kean.

Sally in Our Alley