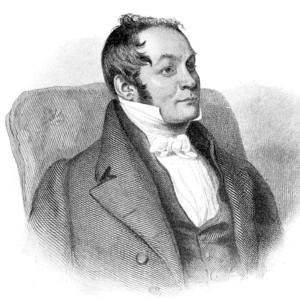 Richard Barham was born in Canterbury and inherited an estate on his father’s death when he was only six or seven years old. He was educated at St Paul’s School in London, where he became school captain (head boy), and in 1807 went on to Brasenose College, Oxford, with the intention of studying law. Once there, he changed his mind and decided to enter the church. He was ordained in 1813 and after a period as a curate became rector of St Dunstan in Snargate, near New Romney in Kent, in 1817. Whilst there he suffered a serious accident which gave him the time to write during his convalescence. In 1821 he was appointed a minor canon of St Paul’s Cathedral. Three years later he became one of the priests in ordinary of the King’s College Chapel.

In 1826 he began to write a series of tales, some in verse, some in prose, known as the Ingoldsby Legends under the pseudonym Thomas Ingoldsby. These became very popular and were published in three volumes between 1840 and 1847. A collection of his other poems, The Ingoldsby Lyrics, was edited posthumously by his son. He also wrote a novel, My Cousin Nicholas.

Richard Barham died in London in 1845, aged 56, after a period of ill health. His verse is written in a light and humorous style, and his best known poem is The Jackdaw of Rheims.

The Jackdaw of Rheims

The Merchant of Venice: A Legend of Italy

The legend of Hamilton Tighe